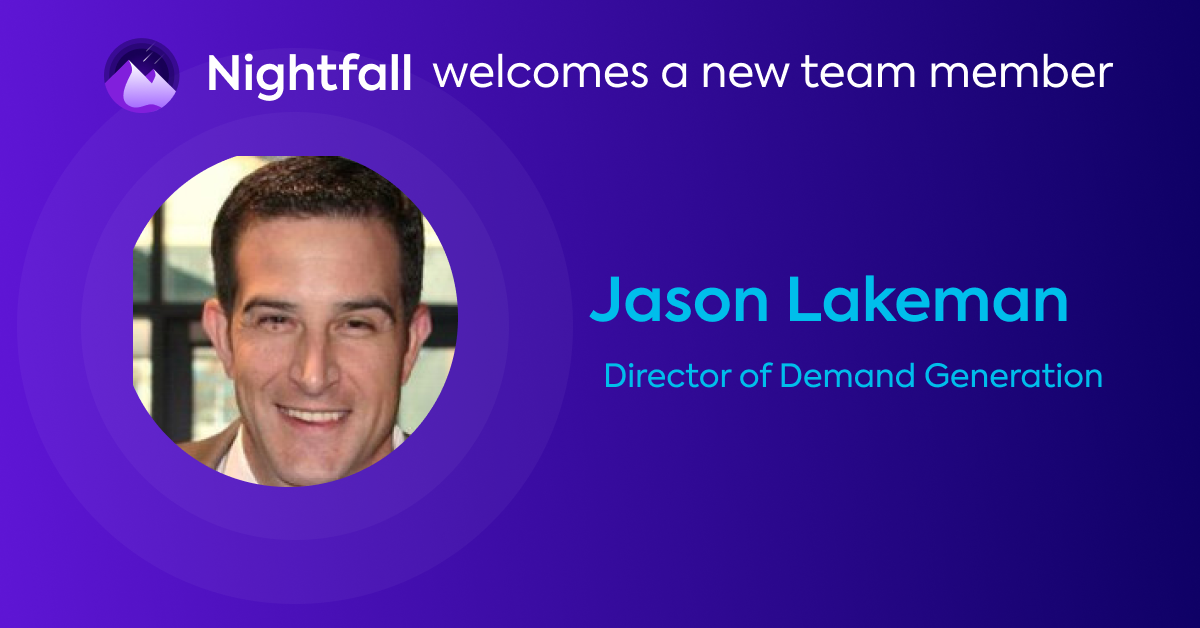 Jason Lakeman joins Nightfall as our Director of Demand Generation. With a distinguished career in marketing, Jason has gone from working with giants like Coke and Pepsi in the 2000s, to building out marketing functions at startups in the 2010s. Jason’s journey took him from the world of television, print, and radio marketing to the earliest days of digital marketing. Having experienced the move to digital first hand, Jason is a wealth of knowledge about the marketing industry and brings with him a very holistic approach to understanding and evaluating marketing campaigns.

You got a start in the world of marketing by doing sports marketing, specifically helping with the Super Bowl XXXIII campaign. How was that experience?

It’s been a long career. From where I started to now feels like night and day, to use a cliché. Growing up I played a lot of sports and was a big sports fan, so my initial foray into my career was through sports marketing. I was fortunate enough to land an internship with Coca-Cola while I was still in school. Luckily the Super Bowl was in Miami at the time, which is where my college was, and I managed to get a role on the local market activation team that Coke would send down from Atlanta to work on the Super Bowl campaign to ensure business for the local bottling community.

It was a really great experience in terms of getting experience and a behind the scenes look at what went on in sports marketing, meeting senior leadership at Coke, and even making lifelong friends that I have to this day.

How would you describe your early career trajectory?

So after college, I continued to work on a project basis with Coke and moved back to California. I was invited to work on the next Super Bowl marketing team which, of course, I accepted. So I went down to San Diego for a few months. I then went to Atlanta, to work for a new agency headed by someone I worked with peripherally at Coke.

Because of my background and the background of the Agency’s founder, I’d been given the opportunity to continue working on more Coke campaigns. We did things like partnering with the Atlanta Falcons. We also launched Dasani bottled water while I was there. The biggest campaign that I got to work on was a year and a half assignment in Salt Lake City for the Winter Olympics.

That’s a really impressive background. So I take it you’re a Coke person?

I’m actually drinking Diet Coke right now, so I’m staying brand loyal. But actually, once I’d finished the Salt Lake City campaign, I realized I wanted to move back to the Bay Area, which is where I’m from. So I ignored brand loyalty and joined an agency working on Pepsi business.

How was that? And where did that end up taking you?

It was a little bit of a culture shock, but very interesting. So I started out working in support of their local bottler. My work with Pepsi mostly involved a lot of retail activation, doing media marketing like radio, print, and billboard. My job kept me busy with travel as I managed the Pacific Northwest region; my area was from Seattle down to Fresno and over to Reno. I stayed there for about a year and a half and went into an entirely different direction by joining a global staffing firm.

That was at Robert Half, right?

Yeah. So I joined their corporate headquarters. Since I’m old as dirt, this is pre-digital. I started out at a junior level working with more traditional media. I led their North America radio advertising and I also did a lot of print ads, trade shows, marketing collateral, that sort of thing.

The company was kind of late getting into digital, but when it was clear we needed to shift, I was the first to raise my hand and say “Hey, that’s something I’m interested in. I see this as a big opportunity for the future.” So I led our foray into what would become digital marketing. At the time, what I was doing wasn’t called demand marketing, but in practice that’s basically what it was. So I came to run their paid social. I also did some display and managed the paid search function.

How was that transition?

Yeah. So I think what attracted me to digital—and I wasn’t fully aware of this until I’d started—was the immediacy of the results. You can just see the impact of what you’re working on in digital. In more traditional media, any KPIs you had were a bit loose and nebulous. It was just hard to get the feedback you needed to assess performance and quickly change course. Like, great, we ran a billboard but what exactly did we get out of it? It’s a lot of anecdotal speculation on “this is working or that’s working instead.” Whereas, as you know, in the digital space I can see immediately what is working and what isn’t. I can drive exactly the right type of lead volume that I’m trying to pursue. So that was really exciting to me. Once we got our tracking in pace, which was quite an undertaking itself, that immediate kind of win was really appealing to me and still is today.

What was it like making the case for digital? Did it require a change in psychology for leadership there, or was it pretty straightforward?

When I started going into digital at Robert Half, the company was open to it, and we obviously had a strong incentive to do so. But there was no one there who really had that experience, so we leaned heavily on an agency, my manager and me. I wouldn’t say they were hesitant but there was a lot of education that needed to take place, especially since we’re spending thousands of dollars a day, they want to see a healthy return.

So a lot of it was just maintaining constant communication, making sure they felt good about the ad spend and making sure we’re gaining learnings if not lead volume.

Given your extensive career, how do you feel the fundamentals of marketing have shifted?

Definitely. A lot of what I was doing pre-digital was top of funnel, even though it wasn’t called that back then, and digital obviously allows us to have more touchpoints. But even within digital, there have been changes. For example, with digital, companies have kind of been trained to expect an immediate return, but one lesson I think everyone is learning is the need to be more cognizant of driving brand equity at the top of the funnel. Being overzealous and going after that conversion can sometimes bite you in the foot. You need to drive brand equity, brand preference, and familiarity as that halo effect can be valuable in driving your KPIs going forward. I think this sort of shows that some aspects of traditional marketing still remain in the digital world.

What motivated you to switch to demand generation? Was it a realization that this was going to be the future?

Yeah, definitely. We were a little late getting into the game at Robert Half, so I think any late person could see that it was going to be omnipresent. But what I like is that it’s constantly evolving. Apps like TikTok have changed the way B2C companies do engagement from just five or six years ago. Even more traditional digital spaces like Google, Facebook, LinkedIn are constantly evolving and there are new offerings we can test. That ongoing evolution is what keeps it exciting.

What interests brought you to do marketing in the SaaS and data compliance space?

It was a long evolution. The time at Robert Half definitely bridged the gap from B2C marketing roles, in sports and culture, to B2B. In the staffing world, you market either a business audience or a consumer audience, depending on the economic situation, and being able to switch gears between B2C and B2B was a great ability to develop. So that carried through to my next role at Bill.com, which was a B2B SaaS startup.

What would you say is your favorite campaign to have worked on?

I would say my favorite ones are the ones that worked, which is a simplistic answer, but it’s true. I was really happy with where we got our paid search at Bill.com. When I joined, there was no demand gen person in place. I reported to the VP who was holding things together Before I started, Bill was spending maybe $30,000 a month for mixed performance campaigns. Fast-forward to three and a half years later, we were spending 1.3 million a month and driving consistent and efficient lead volume from search and a variety of other channels. I built out our LinkedIn machine and a really robust Facebook retargeting campaign. So there's a lot of stuff to choose from, but I would say if I had to pick just one campaign, I'd be most proud of what we did in paid search with Google and to a smaller extent Bing.

Do you have advice for anyone starting a career in marketing?

I would say if someone is just coming out of school and interested in getting into this space, they should first work with an agency. Doing so will get you exposure to a lot of different verticals. You’ll also get exposure to learning opportunities and internal leadership, but it’s also a way to see where you want to go with your career because you’ll have the opportunity to work with lots of different organizations. Agencies are basically instant networking environments, you’re going to meet a lot of people who are young and at the early stages of their careers, you’ll also get to work with clients who you could potentially work with in the future too. It’s good work, but people tend to burn out with agency life, so I’d recommend a good one to three years at most and then looking for an opportunity on the client side.

Are you reading, listening to, or watching anything interesting? Could be industry related or not.

I like reading a lot of US history, mainly biographies. I just finished one on Teddy Roosevelt and I’d read one on Andrew Jackson. Outside of that, I like watching sports and other stuff on Netflix with my wife and kids.