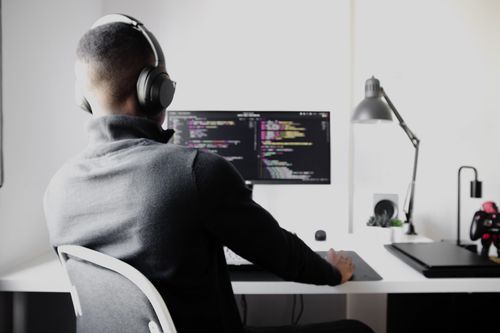 “Software developers are the people most targeted by hackers conducting cyberattacks against the technology industry, with the hackers taking advantage of the public profiles of individuals working in the high-turnover industry to help conduct their phishing campaigns,” reported ZDNet.

Software developers often have administrator privilege across systems, which makes them a prime target for a cybercriminal looking to steal a company’s data. And, while devs are tech-savvy, they are still human and susceptible to phishing and other data security risks.

Not only are software developers personally under threat for hacking, but they’re also responsible for building secure apps and tools that protect a user’s valuable data. Unfortunately, the majority of successful cyberattacks are caused by human error. Software developers make mistakes like anyone else, but these mistakes can cause millions of dollars of damage if not caught in time.

In this case, writing good code means writing secure code. This guide will break down some of the basic data security protocols developers must know to protect the integrity of their app and, inevitably, the data of the end-user.

No, not the intelligence service. In this case, CIA stands for Confidentiality, Integrity, and Availability. Software developers must undertake security protocols to make sure data maintains these three qualities. Here’s what this looks like in practice:

By keeping these three data security tenets front of mind, developers can begin to prioritize the data security protocols that protect a business’s valuable information.

These data security protocols not only help keep your data safe, but they can also meet PCI application security requirements.

Credentials and secrets are in danger of being exposed or shared on cloud systems daily: credentials may be embedded directly in code repositories, for instance, or shared via email or chat among developers. Developers must be careful to only share credentials and other data once it has been encrypted.

Encryption is a major requirement for PCI DSS compliance. Developers should know how to build encryption for any data that is transferred in and out of a platform, as well as any PII that’s stored by the company. Passwords, API keys, and other credentials should also be encrypted to protect this valuable information.

“As simple as they sound, firewalls are one of the most efficient tools in battling with cyber criminals and malicious attackers. An efficient and up-to-date firewall keeps various threats away, such as malware, viruses and spam,” writes one expert.

Firewalls may be common, but they are often overlooked by devs and left out of date by security teams. Maintaining a firewall is the first of the 12 PCI application security requirements. Developers should know how to set up a firewall and keep it secure.

“Cryptography is highly relevant to any software that holds sensitive data, PII, PHI, or anything that is beholden to industry standards such as PCI-DSS or HIPAA,” wrote the Simple Programmer. “Since this data is extremely sensitive, it’s important for developers to understand which algorithms to use in which situation, as well as which algorithms are stronger than others.”

Cryptography can help enforce the security, privacy or confidentiality of messages sent over an insecure channel. For developers, knowing the ins and outs of cryptography is crucial to making sure your data is kept safe.

For developers, working with MFA or 2FA in place helps reduce the risk of insider threat. It’s a basic identity and access management step that can ensure anyone accessing valuable data is who they say they are. Implementing 2FA for applications like GitHub can be critical to preventing attackers from stealing data from code regardless of if it’s in production or not.

Phishing and other threats

Software developers need to be aware of the risks associated with their role in the organization. Phishing scams are on the rise, as is whale phishing. What is whale phishing? It’s a phishing attack in which a hacker poses as a senior member of an organization and attempts to steal sensitive information or gain access to a computer system to steal data.

Devs need to know how to prevent email spoofing, but also be aware that they could be the target of a whale phishing attack or normal phishing attack. Even with the right security protocols in place, the threat of human error will still lead to vulnerabilities in the system.

Vulnerability scans perform regular systemic check-ups to make sure data is kept secure. Vulnerability scans are particularly critical in the age of remote work as the resources organizations might be relying on can have vulnerabilities that leaves data insecure. However, organizations should scan and manage not just the vulnerabilities in the software resources they use to work, but also within their own applications that are in production. This is critical to ensuring that the apps they build for their customers are secure and are compliant with data protection laws.

In addition to vulnerability scanning applications in production, there are other things developers can to ensure the security of their users. Companies rely on Nightfall DLP, for example, to scan their applications in real-time for any sensitive data they might collect from customers. Using our API, companies that work with us can classify strings of text or files like documents and images to ensure their own customers don’t inadvertently overshare PII, PHI, or other sensitive information while using their services. Nightfall has over 150+ detectors that can scan over 100+ file types in order to identify instances of improper data sharing. Nightfall can then redact, quarantine, and delete text, strings, messages, or files containing sensitive tokens.